Every kid loves celebrating their birthday with their friends and with that annual celebration usually comes the request of having a birthday party they can invite them to. Cue stressed-out parents trying to decide how best to entertain a group of youngsters for the afternoon whilst keeping them all safe!

Coming up with ideas for a boy’s birthday party doesn’t need to be a struggle. Sometimes it’s good idea to think back to birthday parties you used to attend when you was a child. If you’ve got some money set aside, you could look at existing entertainment venues that provide party bookings for kids, some of which may even handle the catering side of it too! Or they may at least provide somewhere for your party of kids to have a bite to eat afterwards, even if you supply the food yourself.

Blending traditional with contemporary thrills, I share my top birthday party ideas for boys to make it a day full of fun and laughter, for a birthday party to remember.

Speeding around the race track is great fun, especially for young petrol-heads. Boys who love cars and going fast will adore go-karting, from donning the motor helmet and overalls to putting their foot down on the accelerator in a bid to beat their friends’ times around the track. There’s many different race tracks dotted around the UK, both indoors and outdoors, offering flat or elevated tracks to race around. With twisty sections, fast straights and hairpin bends, go-karting boasts plenty of challenges for budding racers. There’s usually a minimum age for go-karting so it’s always best to check with your local track.

Something that can produce awe and wonder at any age, young or old, is magic tricks. Whether it’s a card trick or illusions and slight of hand that sees objects appear and disappear in front of your eyes, magic thrills and mesmerises to keep an audience enraptured in the performance. That’s why we have magic acts such as Penn & Teller or our very own Dynamo, and to some extent, illusionist Derren Brown, who captivate and have us wondering “how did they do that?”. For a kid’s birthday party, a magician may be a traditional entertainer but they still remain to be one of the very best.

If you want to burn the kids’ energy at a birthday party, then running around the dark with a laser gun, shooting opponents’ body armour is an exhilarating way of spending an afternoon. Much like other sports, you’re split into teams and it can be quite the competitive exercise as the aim is shoot at the opposing team members whilst limiting how much you’re shot at yourself. With the guns using light, there’s no chance of injury like you have with paintball or airsoft, though you might want to watch where you’re going as there’s plenty of obstacles to hide behind and inevitably the younger kids may end up running into your path at some point. 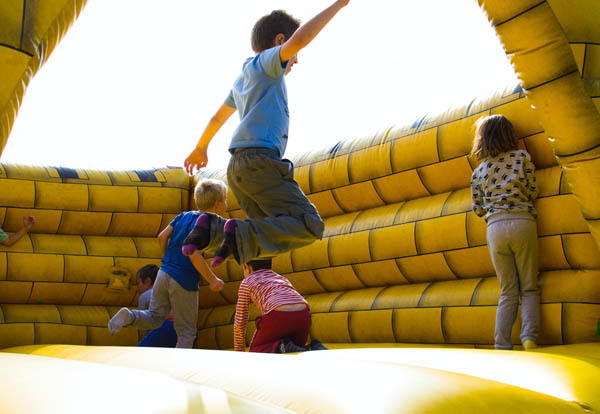 If you’re lucky to have the weather for it, then a bouncy castle remains to be one of the popular attractions for a birthday party. By hiring a bouncy castle for the afternoon, the kids can bounce and jump for hours whilst you prepare the buffet and nibbles for when they inevitably get tired after working up an appetite. Some bouncy castles are more extravagant than they used to be, incorporating a slide and other such features, but the traditional, simple, square-shaped bouncy castle still provides plenty of fun.

Boys tend to love bugs as kids, especially when they’re rolling around the mud outside, digging up worms and the like. The Bug Man is both exciting and educational, allowing the children to see insects and creepy crawlies up close and to learn about them in a fun way. It’s a great way of the children learning to respect nature and is surely something that will stick in their mind. I can remember when the bug man visited us at primary school and I faced my phobia of spiders by holding a tarantula! There’s something quite thrilling about facing your fears and you begin to realise that insects and bugs are quite cool creatures and not at all scary as your mind sometimes makes them out to be.

Back in the day, I recall seeing a Wacky Warehouse almost everywhere I went, usually adjacent to local family pubs or eateries. Though some of those pubs have since changed hands and got rid of their kid friendly areas, the appetite for soft play adventure is still there. We see it now in the form of the more grown-up “Ninja Warrior” aimed at older kids and adults, whilst Wacky Warehouse and specialist, independent soft play centres cater to the younger children. Whether it’s tumbling through the padded obstacles, crawling through tunnels or whizzing down the slide into a ball pool, a soft play centre allows a kid’s imagination to run wild with adventure and will provide a good couple of hours of entertainment.

About Vicky 18 Articles
I love improving my home and lifestyle in a way that won't break the bank. When I'm not doing that, I enjoy writing and sharing my tips on this very blog!